The Voters’ Pamphlet is Here! 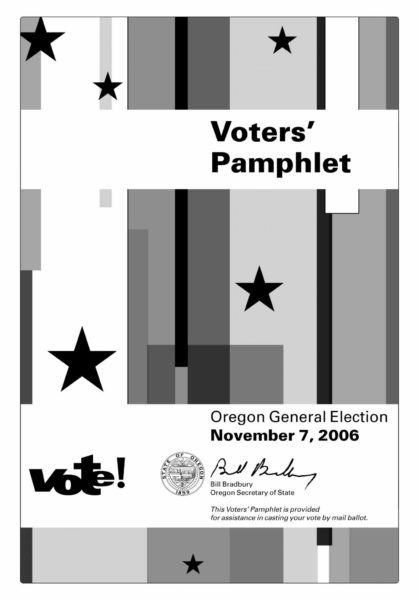 I received the Oregon General election Voters’ Pamphlet, 1 of 2, State Measures in the mail today. Life is good!

Oregonians get a “pamphlet” listing the measures and candidates. The measures includes the official ballot title, the test of the measure, an explanatory statement, and the fun part: arguments in favor and in opposition. For a mere $500, Oregonians can submit arguments that are included in the Voters’ Pamphlet and mailed to all voters. Because the price is a good deal, the number of arguments continues to increase and the Voters’ Pamphlet now comes in two volumes: Statewide Measures and Candidates. I believe the Candidates pamphlet also includes any local measures.

This election, Oregonians get to vote on Measures 39 through 48 — the state measures pamphlet is about 170 pages long. There’s no excuse for Oregonians not to know the issues. I plan on reviewing the ones that interest me (maybe all of them) in individual posts to follow over the next few days.

Update: According to the Oregon Secretary of State’s website, the online version of the Voters’ Pamphlet will be available starting October 13, 2006. That’s tomorrow! Can you feel the excitement?!

Update 2 (Oct. 13, 2006): It’s online! While waiting, I discovered the Military/Overseas Voters’ Guide has the filings of the arguments including their cover sheets, bad handwriting, and all.