I wrote yesterday about President George W. Bush being the biggest spending president since President Lyndon Johnson. I based this on information from the Cato Institute’s recent paper, The Grand Old Spending Party: How Republicans Became Big Spenders.

The paper compares Bush with prior presidents, slicing the data from different directions to see whether military spending, unemployment, entitlements, etc., are the cause of Bush’s exorbitant spending. Here’s a telling graph:

Bush shares another characteristic with Johnson (and Carter): they increased both national defense and non-defense spending. Other presidents decreased one or the other. What’s striking is the steepness of increase for both spending categories under Bush.

Instead of “let them eat cake” Bush is attempting to have his cake and eat it, too.

2 replies on “Guns AND Butter”

I don’t see meaningful associations, absent an analysis of PER CAPITA spending in 2000 dollars (and factoring the transition from the pre 70’s gold currency standard). What is the ratio of per capita deficit/surplus to per capita GDP?

From population data, the U.S. population was around 200,000,000 in 1968 and is around 280,000,000 now, with a fairly linear change. Therfore, Bush’s numbers could be multiplied by about 70% to compare the per capita spending of Johnson and George W. Bush. Here is the chart shown above, with a linear correction factor applied. 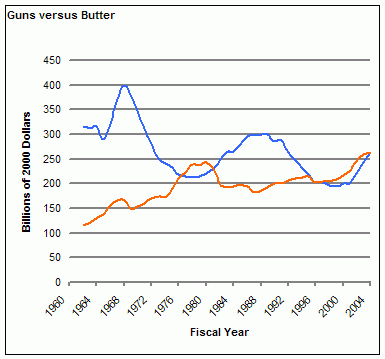 Not being a financial guru, my limited understanding is that by defining the dollar amounts with reference to a single year’s value compensates for any inflation caused by moving away from a gold standard. I’m sure someone will be able to correct me if I’m wrong…

In any case, because both the defense and non-defense spending are measured similarly, the main point is still true. Bush is increasing spending dramatically on both guns and butter.